VELUX – or how to invite the light into your home!

It’s been a while since I wanted to write this article, but the project encountered a lot of unforeseen events, including Covid, which stopped the construction work for almost a year. Not to mention the surprises that one encounters when doing renovation / construction on old buildings…

But to make you want to continue reading, I’ll show you what I’m going to talk about in a simple before / after:

This is my second apartment renovation project, but it is the most ambitious and the most complex. Especially much more complex than expected.

But before telling you about all the details, I want to thank the VELUX team who contributed significantly to the success of this project because with the help of their experts I was able to plan the “light entries” and choose the right products to transform this apartment into a real bath of light.

Let’s start with a little history: Many apartments in Paris still have old skylights that are called “Vasistat”. What is interesting, however, is that it literally means: “What is it” in german.

According to Wikipedia it is an oral borrow from German: this word has for etymology the recurring question “Was ist das? “, Meaning in French” What is it? », Expressed via a sort of hatch in a door, by which the Germans would talk to their French visitors before opening the door to them.

I doubt the accuracy of the translation (I do speak german…) because in German you would rather say “Wer ist es?” (Who is that) or “Wer ist da?” (Who is here). But the finality is that those “Vasistas” windows, often in single glass, are still common today.

For my renovation project of an old apartment in the attic I had to think about replacing these windows whose exact equivalent in size does not / no longer exist and especially the installation of a new ceiling.

Indeed when we started the first part of the construction works we identified the opportunity to raise the old false ceiling in bad condition and install a ceiling following the roof. This also allowed us to plan the replacement of the skylights with VELUX windows. The result: an apartment where today even during cloudy days there is a lot of light. The other advantage in this period when many of us work at home: the impression of working in the open, knowing that in addition the windows are motorized!

I will tell you more about the project in a future post! 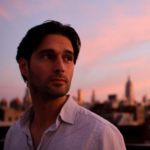 I like Travel, Food, Sports, Tech and Photography 📸
Not French but from 📍Paris